Akissi: A Funny Little Brother – Tag along for a funny African adventure!

Akissi: A Funny Little Brother – Tag along for a funny African adventure!

The half-hour Boomerang special following a fearless little girl in her day-to-day escapades in a modern African City airs on Thursday, 16 June at 08:45 CAT. 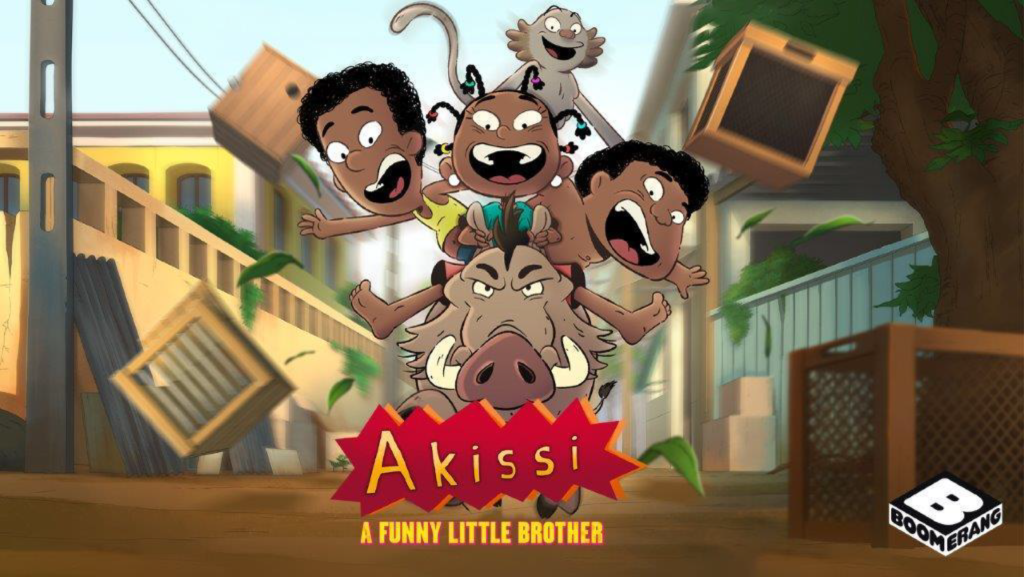 This heartfelt Boomerang half-hour special follows a fearless little girl, Akissi, and her monkey friend, Boubou, as they set out on hilarious adventures in their contemporary African city. The show is based on the best-selling comic book series by critically acclaimed Ivorian writer Marguerite Abouet and French author/illustrator Mathieu Sapin.

Akissi: A Funny Little Brother uses humour, energy and a universal style to tell the stories of this small but fierce little girl and her best friend, her monkey. It also paints a portrait of a lively, vibrant and expressive Africa, far from the usual clichés, which will become as familiar to the viewers as it is to Akissi and her friends.

With sales of more than 115 000 copies and translated into 9 languages, the Akissi book series, like the animated special, is inspired by Marguerite Abouet’s childhood in Abidjan. “Akissi invites children to go off into a warm and chaotic unknown world, an uninhibited and relaxed roam through an Africa that is so near and yet so far away,” says the writer. “It’s like an open-air theatre where these young characters and their sense of hospitality unceremoniously grab your attention. Even though they have some flaws, they are always happy and active, and children from all over Africa will be able to identify with them.”

Akissi: A Funny Little Brother has been produced by Ellipsanime and was co-financed by France Télévisions for France and Warner Bros. Discovery for Africa. The English-speaking version was dubbed using local South African talents through The African Animation Network. Many of the young voice artists reign from the National School of the Arts in Johannesburg, including 16-year-old Phophi Muleya in the titular role. Other African creative talents include Central African-born French singer and musician Bibi Tanga, who composed Akissi’s jazz, funk and afrobeat-influenced music, and Ivorian line producer Angelin Paul from French studio GHWA Productions.

“We are delighted to present the world of Marguerite Abouet to our sub-Saharan African audiences. Akissi is a free, curious, mischievous and caring heroine in contemporary Africa’s energetic and vibrant environment. Through this special, we are increasing our animation offering aimed at young African audiences and working towards a diversity of characters in unique stories,” said Ariane Suveg, VP Head of Kids Channels, Warner Bros. Discovery, France, Africa & Israel.

Tune in to Boomerang Africa on Thursday, 16 June at 08:45 CAT and relish the laugh-out-loud misadventures of this fearless little girl in her day-to-day escapades in a modern African City!

Home to your favourite cartoon characters, Boomerang Africa gives kids aged 4-7 years old and their families more to laugh about in a safe space. The fun and surprises never stop on Boomerang, inspiring kids and families to tune in to the latest shows. Reaching over 12 million people every month in South Africa alone, the channel is the #2 most popular kids’ channel in South Africa.

Boomerang’s programming includes some of its most iconic characters: the famous cat and mouse frenemies, Tom and Jerry, the hilarious Mr Bean, and the beloved Masha and the Bear, all voted ‘Coolest Cartoon Shows’ in 2021 by South African youth. Fan-favourite TV shows such as Zig & Sharko and Looney Tunes Cartoons shine alongside our new Boomerang originals, like Grizzy and the Lemmings and Taffy. Boomerang also showcases local African productions and initiatives such as Boomerang Tunes and My African Stories.